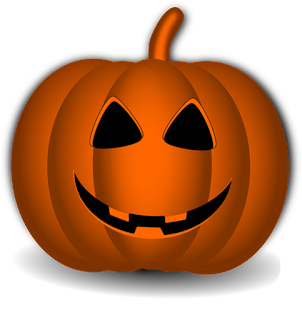 Thanks, Nancy, for agreeing to be part of the fun.


1.  You're born on Halloween and have the ghostly evil super powers of one of the following: The Ghost from Poltergeist, The Frankenstein Monster, The Mummy, The most Evil of Witches, The Devil himself, Freddy Kruger, Pumpkin Head, Michael from Halloween, or Jason from Friday the 13th. Alternatively, if you prefer, pick one of your own. Otherwise, tell us which one you would choose and why? No friendly ghosts allowed! You're to wreak havoc in this scenario!

I would use the ghost of the drunken seventeen year old who fell into the frigid Pacific when he tried to pee off a cliff near Davenport. He died on Halloween, the day the first Regan McHenry Real estate mystery was published. He lurks under the waves and drags surfers who are foolish enough to surf alone off their boards to a watery death deep in the ocean.

2. The Zombie Apocalypse is going to occur this Halloween and for 48 hours, the world is thrown into chaos. Live through it and consider yourself lucky, you've been warned. What is your first step, especially as no one else knows or believes you? Do you leave family behind and seek shelter to ride it out, or do you try to save your family? How and why?

I’d try to save not only my family, but a group of friends. I’d invite them to a Halloween party at an abandoned factory which has been carefully sealed with concrete in the windows. Once inside, I’d close a massive metal door and secure it with many bolts and beams. We’d party through the whole apocalypse.\

3.  Because of the time of your birth, (see the 1st question) the angels have decided to forgive your sins and are offering to remedy one evil that now exists in the world, but only one! Which would you choose and why?

I’d put the Middle East back together because it’s such a cruel place at the moment.

4.   Why is Halloween a favorite holiday, or not a favorite, and if it isn't why did you participate in this query? Come on; tell us your biggest most secret Halloween fantasy!

Opening from “The Widow’s Walk League” which explains why Halloween is so appealing not only in Santa Cruz, but everywhere. “Halloween in Santa Cruz coupled unbridled creativity with people freed from their normal inhibitions. The night was festive and exhilarating, but with so many people anonymous behind masks, there was always the potential for trouble.”

I’ve seen my Halloween fantasy done. The reactions of the people who were given a piece of paper with their death date on it by a person in a black shroud was so spectacular, I used it in the book. I may do that again this Halloween.

Jerry sauntered along Desperation Holler Road that earlier echoed with the excited shouts of ghosts and ghouls as the children scrambled from house to house in colorful and frightening costumes.

Dusk dissolved into the blackest of nights as the little monsters disappeared into the shelter of the brightly lit houses with their chocolate goodies.

The witches abode was anything but abandoned. Jerry used the secret knock—three rapid strikes followed by silence for a count of three, and then three more rapid knocks—and waited for the door to open.

He was greeted by the quintessential grandmother: an old woman short and round, her gray-haired pulled into a neat bun and her pink coat sweater buttoned at her neck to better display a large smiling jack-o-lantern pin attached to it near her shoulder. She reached into the basket slung over her arm and produced a Snickers Bar, not the fun size but a full-sized dollar bar, and extended it toward Jerry.

After a quick look left and right to make certain no one was spying, she morphed into a hunchbacked witch with a long curved nose complete with a prominent mole. Her lips turned up into a cruel smile. “Come in, my darling,” she cooed.

“You have done well this evening. I have four children-pies backing in the oven and only need one more pie for my coven’s midnight party. “He’s another bunch of stuffed animals for you; use them to bring me two more children and then all my candy will be wrapped in hundred dollar bills and be just for you.

“Here’s a special toy,” she said as she placed a large stuffed spider around his shoulders, “a treat for you, my darling.” The witch pointed a bony finger in his direction. As she did so, the spider tightening its legs around Jerry’s neck as it sunk its fangs into his jugular vein. Stuffed animals flew from his arms as he twisted and struggled to pull the spider off.

His anguish only lasted a few seconds before he collapsed. “Thank you, my pet,” she cackled at the spider. “He’s a big one. I’ll have enough of him for my famous mincemeat pie and may be able to make some head cheese out of him as well. What’s that? Yes, of course, all his blood belongs to you.” 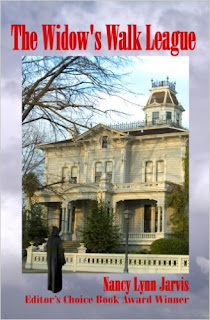 Santa Cruz husbands are being murdered. The local news media is buzzing because a dark-clad figure witnesses describe as Death has been seen lurking nearby each time a murder is committed.

When new widows start hiring real estate agent Regan McHenry to sell their houses, she discovers all the murdered men have something in common: their wives belong to a walking group called The Widow’s Walk League.

No wonder Regan is worried when the group’s leader starts paying special attention to her husband, Tom.

Regan invites you to attend Woodies on the Wharf and go to a séance with her as adventures unfold and she tries to keep her husband safe in the fourth book in the Regan McHenry Real Estate Mystery Series.
Regan’s best friend, Dave Everett, Santa Cruz Police Community Relations Ombudsman, is back to lead a new cast of quirky characters and struggle with Regan’s amateur detecting.
Amazon

Nancy Lynn Jarvis was a Santa Cruz, California, Realtor for twenty-five years but was having so much fun writing that she let her license lapse in May of 2013.
After earning a BA in behavioral science from San Jose State University, she worked in the advertising department of the San Jose Mercury News. A move to Santa Cruz meant a new job as a librarian and later a stint as the business manager of Shakespeare/Santa Cruz. Nancy's work history reflects her philosophy: people should try something radically different every few years. Writing is her newest adventure.

I hate spiders but love your ending!

Come on folks a comment may win you a copy of

Have you read the Halloween
stories from the
WEP - Halloween Challenge
Magical - Frightening - Fun!