MY NEXT VICTIM THIS HALLOWEEN 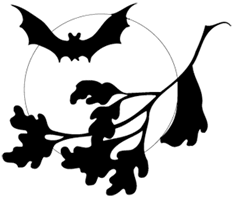 Thanks, Julia, for agreeing to be part of the fun.

1.  You're born on Halloween and have the ghostly evil super powers of one of the following: The Ghost from Poltergeist, The Frankenstein Monster, The Mummy, The most Evil of Witches, The Devil himself, Freddy Kruger, Pumpkin Head, Michael from Halloween, or Jason from Friday the 13th. Alternatively, if you prefer, pick one of your own. Otherwise, tell us which one you would choose and why? No friendly ghosts allowed! You're to wreak havoc in this scenario!
“My name is Marana I am the vampire regent of The First clan of The First Men. You may know me as Bloody Mary. Marana smiled. You may have unknowingly had a drink in my honor.” She ran her sharp black nails down the throat of the crying man kneeling before her. She pricked the nape of his neck, and then bent over to lick the blood that sprouted there.  “I was turned on All Hallows’ Eve two thousand years ago by a weak twaddle of a vamp named David. He had designs on ruling The First Clan. He sought to turn as many people in to succubus as he could in order to overthrow the former regent. He was my first kill.”
The line of newly turned vampires writhed with excitement from seeing the blood of the weeping man. Their fangs descended and their eyes morphed into reptilian slits, but their fear of Marana kept them in place.
Marana wrapped her hand around her prey’s neck and lifted him off  his feet. She turned to the newborn vampires. “David's plan was sound, but his ambitions were paltry. Why seek to rule a clan when you can rule the world?” She threw the man at the feet of her newborns, and launched herself into the air. *Feed now, my children, you will need all the strength you can muster in the days ahead.* 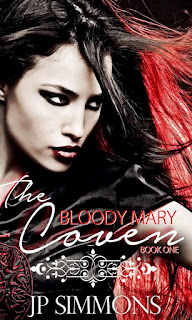 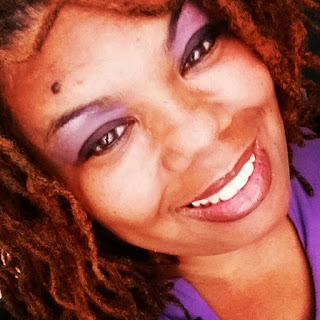 Meet Julia
I love the written word more than cooked food, and that's saying a lot. I write because I have too (It's the only way to silence the voices). There is always a story going on in my head, so if you see me in public I'll probably be scribbling furiously in a notebook. Strawberry Mansion, my first novel, is semi-autobiographical (I am Tabitha in the story). It was a very painful part of my life that I felt an overwhelming need to give voice to. I've changed a few things to protect the guilty, and to add a bit of distance from myself and the story. I love that book. It's a sort of snapshot of my journey into adulthood. Although the characters are young, it’s filled with adult content, bad language, sex, drugs and rock and roll. You're gonna love it, or at least I hope you will!
Begonia Brown, my sophomore novel, is street fiction at its finest. I am very proud of this book. It is the hood as I recognize it, minus the glitz and glam... I pushed the envelope with Begonia. I felt free to tell ugly truths, because the book isn't about me, It's about where I come from. Begonia Brown, although it was hard to write, is one helluva ride as is the follow up, Violet Strawberry Mansion 3. My latest novel, Fornication Volume One takes place in the heart of North Philadelphia on a small block in a run-down house. It is the tale of five dangerous women. They are part of an elite prostitution ring that has run its course. I aim to tell you how the ring was broken. What else is there to say about me? I am a mom, a poet, a nurse, a playwright, a scifi geek, a lover of all things fantasy, a junk food junkie, and a facebook addict. until next time Julia

*****
So awesome, Julia!
I can see Hugh Jackman right now, uh, I mean Van Helsing.
Leave a comment for Julia and you could win a copy of one of her books!
Thanks so much for providing us with some new frights!
Congratulations on
The Bloody Mary Coven! 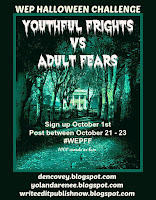 Have you signed up for the WEP Flash Fiction Challenge
Sign-ups are open!
Youthful Frights vs. Adult Fears
What's your scary story?

Christine Rains is the winner of Julia's Book!

CONGRATULATIONS CHRISTINE!
Posted by Yolanda Renée at 12:00 AM