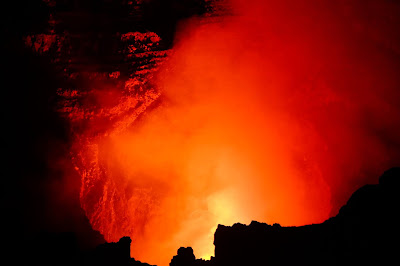 Nevaeh stared into the abyss. Between the sheer marble and granite walls, lava flowed with the blinding brilliance of the sun. Pops of flame exploded in whirlpools of unfathomable appetite. The heat kissed her obsidian skin with desire.

She stared at the magma, a death that assured no resurrection. Was this a choice she could make? Death or an eternity in Hell with a mad man?

Recuperating from her recent escape attempt, Nevaeh curled up on the furs in front of a fire. Voices outside her prison hut alerted her to visitors. Without looking, she knew Ohin had entered the room. The atmosphere felt heavy, airless. She sat up but still faced the fire.

Despite forehand knowledge, Nevaeh's heart jumped in her chest. Her body stiffened at the sound of his caustic voice. The warmth radiating from the fire turned to waves of ice that girdled her bones and captured her heart in a glacial chill.

"Adom will never know that I was behind your kidnapping. Be careful, or you'll be the cause of his death." Ohin warned as he stepped closer and knelt beside her.

He reached out to touch her cheek. "Tell me why? I look just like Adom. We are twins. Why not me?"

Nevaeh pulled away in disgust. "I did not fall for Adom's looks. I fell for his heart. Something you do not possess."

Ohin growled like an animal, stood, and pounded his staff on the mud floor. "I am rich, powerful, more so than Adom. You will see, my Queen, power is more important than heart!"

"I prefer an eternity in Hell to a minute with you. I will never be your wife. Force me and meet your death!" Her words held power, but her petite frame and lack of weapons instilled no fear.

Ohin stepped back but waved off her threat. "At one time, you had a choice, my lady. Be mine or cross the Atlantic in chains. But now I make the choice for you."

"Your threats do not frighten me. Adom is no fool. He will uncover you're evil. Instead of destroying the slave traders, you are their chief caboceer. You are a traitor to your own people."

Ohin laughed. "You're so wrong, Nevaeh. I am a King, and I will have you." As he spoke, a stranger joined them. "Meet, Dr. Zheng. He has a way to make even the dead live. And he's brought proof."

The sound of a clattering chain intensified the cold and tightened her gut into a knot. Was he planning to chain her to her prison? Nevaeh jumped to her feet. She moved closer to the fire but gauged her chance for escape. Her illness caused her to sway, but she fought the weakness.

"Don't test me, Nevaeh. You'll marry me. You'll even love me. If you doubt that, believe this."

Nothing in life had prepared her for the vision before her. Screams formed in the deepest part of her, but she held them inside as one hand covered her mouth and the other clenched. She wanted to close her eyes but could not. An abomination of nature lumbered toward her, and she had nowhere to go but Ohin's arms. Death was preferable.

The man she knew as Goren, her kidnapper, the same man she had witnessed being fed to wild dogs, slowly moved into the light. His death was a truth she could not doubt because she'd seen the horror. Yet he stood before her, held on a chain by two large men.

He barely had clothes or skin but moved forward on his own two feet. The skin that remained hung loose where the ravenous beasts had ripped him open with their teeth. Muscle hung in purple shreds, and broken bones protruded in ugly bloody angles. The smell of death wafted off him like a putrid fog. A dead man lived.

Ohin's next statement pierced Nevaeh like a spear through the heart.

"I will have you—even in death. You will be mine always. Adom is busy with the war. He'll understand your choice and move on. He has an entire kingdom of princesses to choose from."

The proof of his words stood, decomposing before her. Goren's eyes held her gaze, golden brown, rimmed in red, and clouded by tears. His eyes pleaded with her because his mouth and his throat were missing. The horrendously deformed, half-consumed body understood, knew his condition. Goren was fully aware of his own miscreation.

Nevaeh saw the horror of her future.

Ohin smiled. "The doctor is a genius."

Ohin had underestimated Nevaeh's strength and the loyalty of his undead pet. Goren turned his anger toward his master and attacked Ohin.

In the melee, Nevaeh bolted. She made it through the mountain tunnel and once again stood above the Gulf of Fire. Her pursuer not long behind. Ohin held the scars of Goren's attack, but Dr. Zheng held the head of Goren.

Goren still had life in his eyes. Even dismemberment was no cure for the doctor's faux life.

Nevaeh made her choice.

Ohin approached and bellowed, "There's nowhere to go, my Queen. Accept your fate."

Ohin's minions, her people, stood behind him. She saw fear in their eyes as they watched and waited for her surrender.

"Hear me, my people—revolt against this evil. Your numbers alone will defeat him. Death may be your fate, but there is honor in death when evil also dies. You have a choice!"

Her heels teetered on the edge of the precipice.

She smiled. "My destiny. My choice. FREEDOM!"

Nevaeh felt the arms of angels catch her as the fires of Hell opened to swallow her.

Ohin screamed as Nevaeh disappeared into the abyss. The crowd behind him, hearing her words, seeing her sacrifice, pushed forward to the edge.

The volcano bellowed its acceptance of the evil surrendered, and an entire nation celebrated freedom. 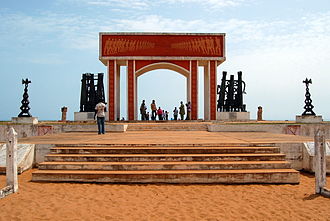 The Door of No Return in Ouidah.

Memorial to the slave trade through the port of Ouidah.