MY FIRST VICTIM THIS HALLOWEEN!
IS THOM FUTRELL
AKA
THE GRIM REAPER!

Thanks, Thom, for agreeing to be part of the fun.

With out further ado a 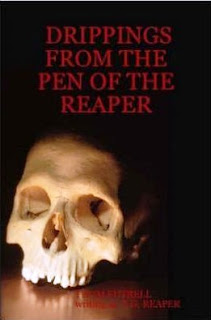 1. You're born on Halloween and have the ghostly evil super powers of one of the following: The Ghost from Poltergeist, The Frankenstein Monster, The Mummy, The most Evil of Witches, The Devil himself, Freddy Kruger, Pumpkin Head, Michael from Halloween, or Jason from Friday the 13th. Alternatively, if you prefer, pick one of your own. Otherwise, tell us which one you would choose and why? No friendly ghosts allowed! You're to wreak havoc in this scenario!

I open my eyes to an empty room. I hear voices in the distance, angry voices calling for the death of Frankenstein. My Father. The wooden platform is eaten with rot and age, a simple lifting of my arms and I am free. The room fills with a loud thud. They must be using a battering ram. I stagger across the concrete floor and head towards the door. I will be spending my first birthday protecting my father from the evil that is the human race.

2. The Zombie Apocalypse is going to occur this Halloween and for 48 hours, the world is thrown into chaos. Live through it and consider yourself lucky, you've been warned. What is your first step, especially as no one else knows or believes you? Do you leave family behind and seek shelter to ride it out, or do you try to save your family? How and why?

I load the family into the minivan, hoping they didn’t notice the couple staggering towards us from down the street. I knew they would never believe me, I was surprised they fell for my “let’s visit the in-laws” suggestion. As we pulled away I noticed Mr. Connors walking out of his house. That is bad because he died a week ago.

3.   Because of the time of your birth, (see the 1st question) the angels have decided to forgive your sins and are offering to remedy one evil that now exists in the world, but only one! Which would you choose and why?

The human race. In horror, they tend to be worse than the monsters who haunt them

I love Halloween! Greatest Holiday ever!

Now the fun part: Finish the story. I've given you the first 100 words. Provide us with the rest, but please hold the number to 750 words or less unless the restriction is just impossible then no more than 1000 words. The winner will receive a $10 Amazon gift card. The contest will be judged by Nancy Lynn Jarvis. The winner will be posted on Halloween!

Jerry sauntered along Desperation Holler Road that earlier echoed with the excited shouts of ghosts and ghouls as the children scrambled from house to house in colorful and frightening costumes.
Dusk dissolved into the blackest of nights as the little monsters disappeared into the shelter of the brightly lit houses with their chocolate goodies.
Jerry smiled, even suppressed laughter, because he knew there was no refuge, not in Desperation Holler on this most evil of Halloweens.
Concealed by the dark limbs of deformed trees and invasive ivy, the innocuous little cabin looked abandoned, but Jerry knew better.
The witches abode . . .

Jerry didn’t bother trying to sneak in. They knew he was coming. The door creaked open as he reached for the bell. He crossed himself before entering.
Two women were seated around a large wooden table, eating something from a bowl. One of them waved for him to join them.
“This is unusual, considering the reason for my visit.” Jerry sat down and a third woman brought him a smoking bowl and spoon.
“It’s Halloween,” one of them said. “No need to be at war on this night.”
“Halloween is the very reason I had to come here tonight. The Arch Bishop said-“
“Hush now, and try your soup,” the one on his left said. He complied and took a bite.
“What do you think of the new Arch Bishop?” The one on the right asked.
“He seems nice,” Jerry replied, taking another bite. The third woman returned.
“Are you sure he’s not too spicy?” She asked, folding the Bishop’s gown.
Jerry looked down into the red liquid that was in his bowl. He heard the women cackle and closed his eyes. He knew he was next on the menu. 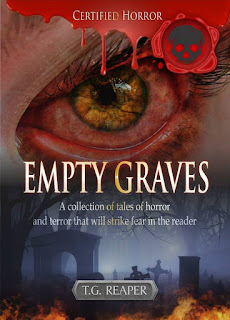 Within these pages exists a world of horror and mystery, a realm where the macabre comes alive and bites back. Journey into the horrific and unsettling world of Empty Graves and enjoy a collection of tales that will chill your blood, and send a shiver down your spine. For just a small taste of what this book holds in store for you:
v  You'll find an apartment complex with a bloody history-
v  An office worker that just won't die-
v  A city with a demon mascot-
v  An actual road to Hell –
v  A rendition of the Three Little Pigs that just can't be missed-
All this and more await you in a story collection written especially for those who aren't afraid of what evils may be lurking in their refrigerator. Nothing is what it seems in these frightening tales, each one a twisted look into the mind of T.G. Reaper-a mind that belongs in a padded cell. 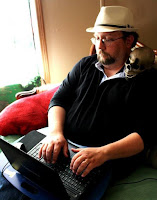 Thom Futrell (T.G.Reaper) is the best-selling, award winning author of EMPTY GRAVES, FRESH GRAVES, MEAT PUPPET and several other books. He has been included in over fifty anthologies including the 2014 GENTLEMEN OF HORROR. Many of his books are written with royalties going to charity organizations such as ASPCA, AMERICAN CANCER SOCIETY, ST.JUDES, and several others. He has written several screenplays, one was picked up by LMN, and another was produced and is now showing on over 60 theaters in 21 countries.

Thom Futrell lives with his family on the outskirts of Jackson Michigan with his wife and two daughters.

For one lucky commenter,
Thom will create a character in his
WIP using your name.

Just answer one of the 4 questions above in a
comment and you could be in
Thom's next horror story!

Have you signed up for the WEP - Halloween Challenge
Youthful Frights vs Adult Fears?
What are you waiting for? 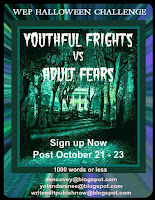 THE WINNER FOR THIS POST
IS THE AMAZING
CHRYS FEY
CONGRATULATIONS!