I am thrilled to be be hosting a very special guest blogger today, Denise Covey, my partner in crime, I mean my WEP partner, my friend, and fellow writer. She hails from down under and while the US is headed into the months of winter, she's dealing with the hot, hot temperatures of the Queensland. But today she here to talk about sin.

Welcome, Denise, now take it away!

THE SEVEN DEADLY SINS OF

I’m
a great believer in how-to-write books. Are you? You should be. Writing is a craft that is never perfected—we grow as writers each time we craft a story, and hopefully, if we continue to hone our skills, we become pretty savvy storytellers.

Added
to my love of writing contemporary romance, I dabble in the paranormal from time to time. What is paranormal romance some of you may ask? Put simply, it is a subgenre of both romantic fiction and speculative fiction.
Paranormal romance focuses on romantic love and includes elements beyond the range of scientific explanation, blending together themes from the speculative fiction genres of fantasy, science fiction and horror. My first paranormal novella, Under the Tuscan Moon, was conjured by adding these elements to the cauldron and stirring in a heavy dose of the Gothic.

With the help of paranormal romance author, Stephanie Draven, I’ve compiled a list of THE SEVEN DEADLY SINS OF WRITING PARANORMAL ROMANCE and nailed it to the iron-studded door I step through each time I sit down with my vampires, werewolves, angels and demons. Many of these 'sins' relate to most genres.

Nothing turns a reader off faster than a book that starts off with a long narrative explaining the building of your marvellous world. Okay, start your book this way, it helps you get into your story, then you need to delete most of it. Info dumps are lazy writing. They’re bad form. But they're so easy to do! Don't I know it. That's why we need critique partners! Let the details of your world come to light slowly, building layer upon layer, let the reader immerse themselves in the experience. Writers of paranormal romance could learn a lot from the best written fantasy novels.

LUST: Fetishism of the Supernatural.

Paranormal romance writers share a trait with science fiction writers. They like to fetishize the supernatural elements. For the paranormal writer it might be going overboard on the ins and outs of werewolves, demons and/or vampires, while the science fiction writer might be a little too much in love with buttons, gadgets and that neat new world they built. These elements aren’t all that interesting in themselves. Not everyone is turned on by long descriptions of fangs, silky silver-grey coats and a superior sense of smell or hearing. It’s not actually characterization. Obsessing on the blood-sucking aspect of vampirism or vampire lore may appeal to some who share this fetish, but it isn’t storytelling. There has to be more to hold your story together than a collection of neato cool superpowers.

Okay, we all know writing teachers tell budding young authors to listen to real dialogue and use it as a model for what their characters say. Well-oh-well. This doesn’t get you far. In real life, people’s conversations are boooriiing.

Why would you want to bore your reader? Paranormal romance characters live extraordinary lives. They never talk about car trouble or going to Cold Rock Ice Creamery unless it has some bearing on the plot, conveys something crucial about their character, or is a delightful little detail sparingly sprinkled into the mix. Real life conversations can drag on for hours. Fictional conversations need to be tight and lean with a dash of sparkle!

Never overindulge or your readers may get up and leave the banquet.

GREED: Too Many Speculative Elements.

The best paranormal romance takes the world as we know it, or the past as we imagine it could have been, and twists one or two crucial elements, following the repercussions from those changes like ripples on a pond. The worst paranormal romance turns itself into a carnival for every strange and unexplained myth, magic, and phenomenon in the cosmos. Elves and vampires, mining together on Xcelsior 54 with space aliens who are ruled by the Wicked Witch of the West in a kingdom called Oz … Yay! Focus, people! In a world where everything is possible, something has to be truly at stake. The television series “Lost”, for example, started out with an intriguing premise, but piled so many new paranormal elements on top of each other that the whole thing collapsed under its own weight, bleeding viewers and disappointing fans.

Most paranormal romance follows the trend of urban fantasy to put existential concerns at the forefront. It’s the fate of the whole world, country, city, species, brotherhood, or pack at stake. Give us blood…more blood. Does it have to be? Hmm. How about a good secret baby vampire romance? Or a simple mistaken identity story between witches? Or a marriage of convenience between werewolves?

(Well, I’ve seen one between a werewolf and a vampire recently…very cool). At the very least, let’s write about universal interpersonal conflicts that focus on a developing relationship at the center of the book, rather than danger and violence. I’ve crafted Under the Tuscan Moon around two characters and their relationship and how it has been twisted due to paranormal elements, and there is definitely violence. But at heart I've written a love story.

Look, if you want to put a glossary of terms at the back of the book for curious readers to look up terms as they arise, go for it. That’ll thrill some! But putting it at the front of your story signals that you think you’re just too special to weave your special language into the book. It says that artful exposition is something paeans must use, but not you. I received some good advice from a critique partner who said, "Denise, don’t make your readers look words/terms up. I hate that! Let them figure it out in context. And no brackets! Throughout your story to explain. You have to make terms clear to the reader in your own brilliant way." Brilliant advice and I believe it made my story more enjoyable.

We all want to be six-foot bombshells who can kick butt in high heels, smite evildoers, and capture the heart of the sexiest angel ever to fall from heaven. But such heroines can’t be all wish fulfillment, quick-witted, never afraid, never at a loss for a words, and always right. It’s held as a given in paranormal romance circles that your hero can be a bastard but your heroine can’t be a bad girl. Really? How could a reader love her if she’s not perfect? (((grimace))) Put some dents in her armour and let the hero call her on her bullshit once in a while.

So in my novella, I wanted to explore how vampires might view humans, whether they envied them or hated them, or a bit of both.

"Vampires were considered cold, stiff, unfeeling by humans, but Vipunin could never sever his ties with his human existence. He should have shed his past like a snake sheds skin. Instead, his past was a bag of stones he carried on his back, a burden which grew heavier with time. Every year for one hundred years he had returned for the harvest celebrations at his family’s castello, torturing himself with his great loss. It gave his purposeless life some measure of meaning. Yet it was his curse to watch the cyclic turns of birth and death and not be part of them.

What did he have instead?

He had eternal youth.

He had eternal life…that was no life.

He had eternal hell."


Thanks so much for giving me this opportunity to talk about writing, Yolanda! You’re a doll. Readers, I hope you enjoyed my take on writing paranormal romance. If you don’t write in this genre, I hope you found something here that is useful for your writing project. And if you’d grab a copy of my book, I won't come to haunt you!

It's truly my pleasure, Denise. I loved your novella, and I can't wait to read of the next exploits of Vipunin and Chuchulain.

Under the Tuscan Moon 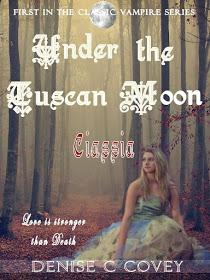 Within the velvety Tuscan sky, a harvest moon glows
like liquid amber. Mysterious shadows seep noxiously through the unsuspecting
forest, preying on the vulnerable, whose blinded gaze mocks their senses.
A man.
A woman.
Forever locked in a sensual embrace.
A werewolf howls…
A cloak swishes…
And,
Alabaster flesh waits to be torn.
Timing is everything in the Danse
Macabre.
On this night the nectar of revenge is at its sweetest.
Just ask Vipunin…
“Who is Vipunin?” you ask.
A tormented soul, longing to recapture the life stolen from him a century
ago. His wait is finally over. His love, Ciassia, has returned and she will be
by his side for eternity…
Or so he thinks…

Welcome all to this
intriguing tale. I had the great pleasure of reading this amazing story. The
lush details and mystery captivates the reader. If you love beautiful writing
and intrigue, you will truly enjoy this story."
Michael di Gesu

"What’s not to like about two Vampires whose voyeuristic bent lends great sense of time and place, whilst their intended victims unknowingly engage in sensual embraces? Eternal life in the dark world is forever the moment of transition from light to darkness, an ageless and inescapable fact of a Vampire’s existence, in which the past is often a haunting and taunting memory. Such is Vipunin’s fate when the present transcends time and presents a dilemma in which he discovers even a Vampire can be struck with a conscience of right over wrong, and all despite dire need to quench his bloodlust. But will his Vampire companion, Cuchulain, challenge Vipunin in the face of outright betrayal? This is a tense, engrossing, and chilling read. Enjoy!"
Francine Howarth 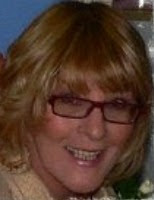 Denise Covey hails
from that land Down Under, where she publishes flash fiction, short stories and travelogues in Australian magazines. When not writing, she teaches English Lit to her rapt senior students who think it’s way cool to have a writer as a teacher.
Under the Tuscan Moon is her first, but not last, paranormal romance. Denise has decided it’s way cool to live in a world of vampires, angels, demons and werewolves.


What do you say readers, any writing sins not listed that you want to share? Have you read Denise's novella Under the Tuscan Moon? Have you tried your hand at writing romance?

Posted by Yolanda Renée at 7:00 PM