Welcome to my
WEP Spectacular Settings
Flash Fiction Challenge entry.
For the first half of the challenge
I've chosen a passage from my favorite novel.

Gone With The Wind by Margaret Mitchell.
It was a savagely red land, blood-colored after rains, brick dust in droughts, the best cotton land in the world. It was a pleasant land of white houses, peaceful plowed fields and sluggish yellow rivers, but a land of contrasts, of brightest sun glare and densest shade. The plantation clearings and miles of cotton fields smiled up to a warm sun, placid, complacent. At their edges rose the virgin forests, dark and cool even in the hottest noons, mysterious, a little sinister, the soughing pines seeming to wait with an age-old patience, to threaten with soft sighs: "Be careful! Be careful! We had you once. We can take you back again."

For the second half of the challenge, I drew from my first impressions of Alaska, and a picture taken in the Brooks Range as my inspiration. 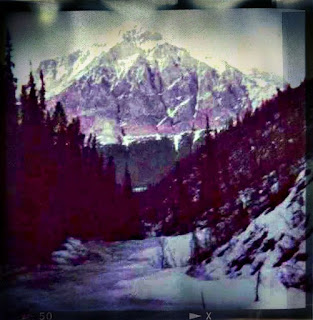 I fell in love looking out over an expansive horizon filled with evergreens and white birch. The view stretched for miles across a valley that flowed in gentle waves of brown and gray to the foothills of the Alaskan mountains, where Mount Denali sat resplendent with a crown of cottony clouds. I'd never seen anything so beautiful or color this bright. I knew then that my decision to take the engineering job with the oil company in Alaska was the right one.
The chill of winter was gone, and during nightly walks through the forests of the Brooks Range, the quiet sang to me. The rejuvenating breeze of spring became my companion, and the views around the next bend my rationale for going deeper into the wilderness. I was an explorer in search of my destiny and with every step, my confidence grew.
The job gave me an excuse to end a long cold relationship. He'd found someone new months earlier, but our shared condominium was in too prime a Chicago location for him to just walk away, so I did.
My arrival at the almost all-male line camp called Dietrich was like stepping into the dark ages. Naked photos of women filled the bus that shuttled us from the airport to check in. Knowing looks and snide remarks should have had me turning back, but I'd resolved to persevere. A woman in a man's world, no one ever said it'd be a cakewalk.
After weeks of trying to find my place in this new world, the wilderness and my evening hikes became a sanctuary.
I was stealthy like a grizzly on a hunt, surefooted like a Dahl sheep, and quick as a fox. But in camp, I was as skittish as the ptarmigan. Constant catcalls, rude comments, and downright crude proposals followed me everywhere. When I refused to react, the men became angry. Slut, whore, and ugly bitch hit me in the back like rocks. These weren't men. Instead, they took the definition of a creep to an all-time low. How would they feel if their mother, daughter, wife or sister were in my shoes?
The fresh air and the mystery of the woods wiped away the ugliness. I was content. The workday became brighter after each hike; rudeness no longer drained my energy. I'd found peace.
I discovered bear tracks in the mud. They frightened and amazed me. The bear that created them was huge. I looked around to see if the beast was still present, then foolishly followed them for a mile before realizing the danger of my quest. I couldn't out run this animal, and I was sure that whatever tree I chose to climb, this brute could uproot. His claws were at least five inches long, but I felt no fear—only curiosity.
During work, I heard talk of bear sightings. Hungry bears looking for a first meal after hibernation had been spotted in camp. We were forbidden to leave the area. My boss made sure I received the memo. I promised to cooperate. Co-workers knew I wouldn't stop and warned me to be extra careful. I assured them I would.
The truth, I was determined to find you. During each hike, I'd discover fresh tracks. I continued my search despite the twinge of fear that circled my spine. Confident I'd outwit my prey, see the bear first, and then return to camp satisfied that I'd tracked the fiercest beast in the wilderness. You became my fate, a goal I needed to pursue, even though I didn't know why.
Six weeks after arrival I'd finally hit my stride. The day felt magical. Details for a project went smoothly. The men were less harassing. My expectations ran high. I skipped dinner and left work early. I was sure the evening would bring me to you.
The sun, higher in the sky filtered through the new growth, kissing my skin with the promise of summer's warmth. I'd gone miles further and discovered a new river higher in the mountains. The water moved swiftly, looked inviting, but I knew it was ice cold. Near the edge, I spotted your perfect paw prints, so fresh the wet soil glistened. Had you just been here? My heart jumped. Was it fear, excitement, or joy?
I froze at the sound of a breaking branch, contemplated running into the water. I hesitated, wanted to turn around, but I knew I'd been caught. You'd won.
The voice was resonate, imposing. "That's a hell of a print. Shouldn't you be running in the opposite direction?"
I inhaled. Conscious my mouth was open, waiting for the scream that never materialized. My hand hid the evidence of apprehension while I giggled at my foolishness. I hadn't laughed in months. It felt wonderful. "Probably, but I'm more curious than frightened," I said as I turned.
The man was exquisite.
"You do know the end when curiosity is the defense?" His smile matched mine. His dark brown eyes danced with mischief. He moved closer. Muscles rippled as he threw the ax he carried over his shoulder and extended his hand. "I'm Kuruk, and you are?"
"Lila." My hand disappeared in his. His shake was firm. He pressed our hands to his heart, rested the ax against his leg, and caressed my face. His touch ignited buried desires. I blushed.
"My beautiful, Lila."
His words were a caress. I trembled in response.
"You've been searching for me."
I nodded and bowed my head.
He lifted my chin. "Sweet Lila, you found me or did I find you?"
I surrendered to the warmth of his kiss. Fate had brought us together. I recognized my future.
Nature's song was symphonic. The world and its ugliness disappeared.
*****
"It's been a week, have they found her yet?
"No. Just the tracks of a massive grizzly they call Kuruk the Monster. They're going to try again tomorrow. Looks like he'd been on her trail for some time."
~~~~~~~~~~~~
Word Count 998/ FCA