Not Guilty & The Great Timelock Disaster by C. Lee McKenzie

Talented author C Lee McKenzie is here today to share some of her secrets.
And share her two recent releases


1.   What was your hardest scene to write?
I actually think it was the first scene in The Great Time Lock Disaster. I’m a novice at writing sequels, and I was scared about not setting up the story so it would follow the tone and capture the characters from the first book, Alligators Overhead. I must have written that opening scene ten times before I was satisfied.

2.   What makes you run screaming?
Bears do the trick, but since I’ve only encountered one of those and it was on the other side of a creek, I might have to go with something else— launching a book, for example. I’ve had a few moments of terror in my life—landing in a plane on the tail-end of a typhoon, falling into a Class V rapid from a raft, raising a teenager—but launching a book is at the top when it comes to inducing fear.

3.   You’re about to be dropped in a remote spot for a three-week survival test. Where would you go? What three tools would you take?

For a truly dangerous challenge, I’d choose Australia’s Outback. After reading Bill Bryson’s book, I know that continent has some of the most poisonous critters on the planet and all kinds of natural disasters to survive. I guess I’d take a hefty supply of water, sturdy hiking boots, and a native guide. I see no reason to try this on my own. I’m not ready to die.

4.   What behind-the-scenes tidbit in your life would probably surprise your readers the most?
I once lived in a war zone. That experience taught me a lot about why war is not only futile, but a true “comedy” of errors. Whoever, decides to go to battle, should go himself and not send others out to do the job.

5. If you had the opportunity to live anywhere in the world for a year while writing a book that took place in that same setting, where would you choose?
This answer would change with each trip I take. However, the south of France is high on my list of places to be while writing. Of course, every place I go is full of distractions: castles, vast deserts, pyramids, beaches. I’d do better to stay home that year to write and not be tempted by those unexplored treasures.

6.If you could tell your younger writing self anything, what would it be?
Enjoy every moment and learn from the best. Read everything, and find out what those authors do that engage you.

7.What does literary success look like to you?
If you’d asked me this question when I first started writing to publish, I would have said, being a published author. Later, I would have said getting good reviews. Today, I’d say, writing good books that people will enjoy reading for many years.

8.Tell us about the book you’re working on now.
It’s not a middle grade and it’s not a young adult book. I’m a bit worried because it falls between the marketing cracks, and the closest label I have is New Adult. It’s a contemporary/realistic story that deals with a young skier who becomes a paraplegic due to a calculated “accident”. There’s a mystery, but there’s also what I hope will be a life-affirming story about overcoming the biggest challenges life can hurl at us. 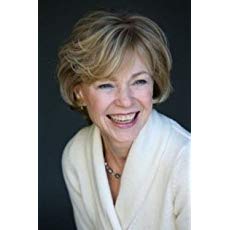 At heart I’m a Californian, maybe even a Valley Girl who grew up and found out Dorothy was right. “There’s no place like home.”
I have a Master of Arts, in Linguistics.
My Passions:
Besides reading and writing, I love to do two things: I love to hike. I love to practice Yoga. Well, three things if you count eating. I love to eat. That’s why I love to hike. Might as well make it four things, because I love to spend time with my family and friends. Wait! I love to grow my own salad. And cats—I love to grow them too, so now I’m up to six things I’m passionate about. I know there’s more, but I’m out of space and you don’t need to be bored.
My Favorite Books:
Anything with Hobbits. Anything Stephen King writes, except I don’t like some of those stories at night when I’m alone or even if I’m not because I’m a real sissy in the dark. Anything with a dragon in the title or on the cover. Barbara Kingsolver’s books. Edgy Joyce Carol Oates books. E.B.White’s Essays, and stories that start, “Once upon a time . . . .” 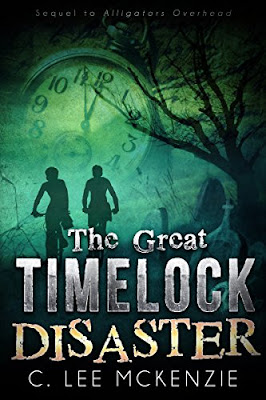 No YouTube. No smoothies. No Manga. Not ever again. Unless Pete figures out how to reverse his bad spell and free Weasel and him from the past. A young wizard accidentally opens a time lock and he and his bookish friend are swept into Victorian England, where they will be trapped forever if that wizard-in-training can’t find a way to reverse his bad spell by the next full moon--just three days away! 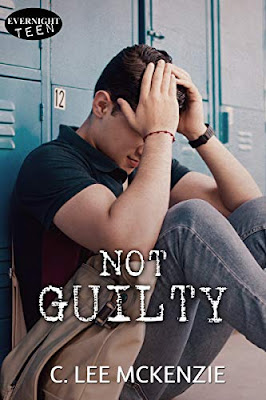 Not Guilty by C Lee McKenzie

"NOT GUILTY is a compelling, engrossing, and ultimately uplifting and rewarding read. I couldn't tear myself away!"—Cheryl Rainfield, author of Scars, Stained, Hunted and Parallel Visions.
A blood-smeared knife. One young man’s word against another. A lifetime dream crushed. The evidence points to Devon Carlyle. He was there when it happened. Everyone knows he had it in for Renzo Costa. And Costa says Devon was the one. In the judge’s rap of a gavel, Devon’s found guilty of assault.
The star of the Oceanside High’s basketball team loses his shot at the one thing he’s worked so hard for—the championship game where college scouts could see how good he is. Now he makes his great shots in Juvenile Hall with kids far different from those that have always been in his life.
Angry?
Hell, yes.
He’s bent on finding who did the crime. He’s bent on making them pay because he’s Not Guilty.
But can he prove it?
Read My Review HERE:

Thank you, Lee.
Congratulations!
You are one talented woman and I think many of us will agree
WAR should be fought only by those determined to solve their problems by it!

Well folks, do you have a question for Lee?