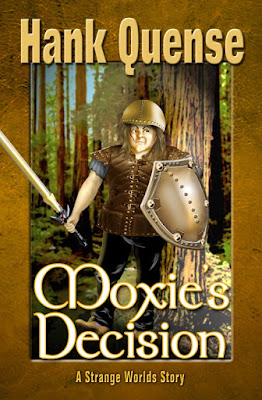 Sometimes it’s fun to add a little laughter and satire to our daily routine so that’s why I’m delighted to be a part of author Hank Quense’s MOXIE’S DECISION Blog Tour with MC Book Tours today.


Entertaining from beginning to end, MOXIE'S DECISION is uproariously
funny and satire at its best. Selected as one of
2016's best YA novels: Huffington Post. It’s also a top pick! Indie Reader: 5 stars


You can enter to win a copy of MOXIE’S
DECISION today. Be sure to check out the giveaway details below.

Moxie has a plan; she’s determined to rule as
queen after her father, King Smedley, dies.

But Smedley refuses to acknowledge her as his
heir. Her uncle also wants the throne and he’s already tried once to eliminate
Moxie as competition.


Moxie recognizes she hasn't been
trained to rule and she needs lessons about the real world. Moxie goes on a
quest to learn how to rule and to learn about life outside the castle.
Moxie faces unexpected obstacles as she struggles with adventures in a brutal reality that tests her mettle and determination.
This is a fantasy coming-of-age story that is decidedly different than the usual ones. The book is filled with satire and humor. What more can a reader wish for?


It takes place against the backdrop of Camelot, but this isn’t the Camelot of legends. It’s Camelot in a parallel universe where the Knights of the Round Table play football and Guinevere coaches the team’s cheer leaders. The wizard Merlin struggles to understand the Magic of the Mind using primitive ink stained diagrams and Stonehenge is a theater-in-the-round.


Moxie’s rollicking adventures are the stuff of comedy. Enjoy!

Backstory: Moxie has a plan to become a decisive, independent-minded woman.  The first phase of the plan involves joining the Heroes Guild to learn self-reliance and weaponry.  She is accompanied by three friends, all knights and graduates of the Guild: Percivale, Bors and Gareth.


Moxie gulped.  In front of her lay her destiny.  Would she get accepted and become a heroine, or would she get rejected?  For the first time, Moxie realized she didn't have an alternate plan.  All her energies had been focused on this day and Moxie had assumed her plan would work.  With mounting anxiety, she climbed the steps and walked through the doors held open by a porter, who remembered and greeted the knights.


Moxie entered a large hallway lit by glazed windows and chandeliers filled with lit candles.  On her left, portraits covered an entire wall.


"That's the Wall of Fame," Gareth said.  "Those are the most famous graduates from the Heroes Guild."


Moxie observed that all the portraits were of angry men about to smash someone or something with a large chunk of metal.


To her right, Moxie saw an area where six clerks labored at desks with quills and abaci.  An open sitting area held stools where eight men waited.


Beyond the waiting men was a large office with closed doors


Bors walked over one of the clerks.  "Tell the administrators that three Guild graduates want an audience with them."


The clerk ignored Bors and continued to scribble on a parchment.


Bors grabbed the clerk's tunic in one hand and lifted him off his stool.  An ink pot fell to the floor.  "You have my permission to tell the administrators that we're waitin'."  Bors dropped the clerk.  "Do it now!"


The clerk jumped up and ran into the office.  He emerged a minute later and held the door open for Bors and the others.


Inside, Moxie saw a long desk with two men sitting behind it.  Both were middle-aged and ate well judging by their jowly faces and the folds of skin circling their necks. Both had neat, trimmed beards.  They gave a bare smile at the knights, but had raised eyebrows for Moxie.


Percivale snapped to attention.  "Chief Administrator Thibault and Administrator Castrani, I'm Percivale.  My mates Bors and Gareth and I have a request to discuss with you."


"How nice to see the three of you."  Thibault didn't sound convincing.  He was tall and lanky with pale skin, white hair and a long face set in a permanent frown.


"And to find you in good health and still in possession of all your limbs," Castrani added.  This one was short and pudgy with a mostly bald head.


"Who is this lady?" Thibault asked.


Moxie hopped from foot to foot and tried not grimace at the men.


"This is Princess Moxie.  Her father is King Smedley of Usca.  Moxie is the reason for our visit."


"That sounds odd," Castrani said.  "We rarely have women visitors."


Moxie gulped.  She couldn't tell if the two men were friendly or hostile.  Both had rigid expressions that gave no hint of their thinking.


Moxie saw Bors chewed his lip while Gareth picked at a nail.


"You see, Moxie wants to join the Guild and she persuaded us to plead her case."


Both administrators sat back in surprise.  "Really?" Thibault said.  "A female trainee?"


"On our way here," Gareth said, "we was attacked by bandits and Moxie helped us defend ourselves and killed two of them with her dagger."


Castrani leaned close to Thibault and whispered in his ear.  Thibault whispered back as the two held a hurried consultation.


Moxie squirmed under the inspection.


"As strange as this may seem," Thibault said, "Administrator Castrani and I recently had a discussion on this very subject.  We agreed that — possibly — it was time to admit a woman or two, provided suitable candidates applied for admission."  He pointed a finger at the knights.  "Do all three of you support Princess Moxie's candidacy?"


Moxie almost wet herself waiting for the knights to answer.


All three nodded their heads.  Bors said, "We do."


"Then it's settled," Thibault said.  "This will be a scholarship of course, so Moxie won't have to pay tuition.  Will one of you tell my clerk to fetch Harry?"


Gareth left the room momentarily to tell a clerk.


Castrani questioned Moxie.  "Do you really understand what we do here?"


"I've traveled with my friends here and I've seen how they react to emergencies and how self-sufficient they are.  They told me they learned that stuff here.  I need to learn how to do those things."


"Are you prepared to dedicate yourself to the training regimen required to graduate from the Heroes Guild?"


"I am."  Moxie had trouble believing that she had been accepted.  Her life was about to change forever.  When she graduated, she would be a completely different woman from what she was today.  She had never been so exhilarated in her life.


A door in the side of the room opened and an impossibly large man walked into the room.  He had a shaved head and a full red beard.  He wore a red-painted leather vest with leather trews and heavy calf-high boots.  His bare arms rippled with muscles, tattoos and scars.  "What?" he roared in greeting.


"Ah, Harry.  Good of you to interrupt your training and attend our little meeting."


Harry walked over and slapped the knights on their shoulders.  "Still alive?  Ya can't be doin' much fightin' or yer'd all be dead."  Harry grinned at the knights.  "Still, it's good to see ya."


Harry turned to the administrators and waited.


"Er, Harry," Thibault said, "I want you to meet the newest trainee.  This is Princess Moxie.  Moxie, this Harry the Murderer."


Moxie cringed in fear as Harry stared down on her with an expression of disgust and rage.  The man exuded violence.  She had never met anyone who could send waves of fear coursing through her body like Harry did just by looking at her.  Even the bandit attack was nothing compared to what she felt around Harry.


"I ain't teachin' a bloody woman." Harry rounded on the administrators.  "Are you two outta yer minds?”


"Harry," Thibault said mildly, "we've had a change of policy and we now accept female trainees."


Moxie saw her dreams collapsing under the scrutiny of Harry, but she wasn't letting this man destroy her future.   She would not be thwarted by him. She took a deep breath and said, ”Hah.  That's how little you know."


Harry whirled on her.  "Who gave you permission to speak to me, vermin?"


"I'm a princess.”  Moxie slammed her fists onto her hips.  “I don't need your permission."


Harry stepped back and examined Moxie once more.  "Ya ain't a princess once ya go through that door."  He pointed to the side entrance.  "Wanna know what yer are then?  Yer pond scum and I'm gonna pound ya inna ground.  Two days under my wing and ya'll be screamin' to go home."


Moxie looked at Thibault.  "This man is incredibly rude.  I assume you'll punish him for his attitude?"


"Harry is our chief instructor.  His manner may be a bit harsh, but he is a very good instructor.  I'll have a clerk assist you in settling in.  Then, in the morning, you'll begin your training."


Harry stomped out of the office mumbling curses and slammed the door.


"I'm sure you'll come to love Harry just like all our trainees do," Castrani said with a twinkle in his eye.


Moxie's exhilaration over getting accepted had been tempered by meeting Harry the Murderer.  She would just have to put up with Harry's rudeness and his boorish manners.


Nothing would be allowed to impede her journey to become a heroine. 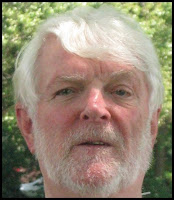 He also writes and lectures about fiction writing and self-publishing. He has published 19 books and 50 short stories along with dozens of articles.

He often lectures on fiction writing and publishing and has a series of guides covering the basics on each subject. He is currently working on a third Moxie
novel that takes place in the Camelot era.

He and his wife, Pat, usually vacation in another galaxy or parallel universe.
They also time travel occasionally when Hank is searching for new story ideas.

Be sure to visit Hank’s Amazon Author Page: https://www.amazon.com/-/e/B002BM76IE

This tour-wide
giveaway (prizes courtesy of the author) is for five (5) eBooks copies
(worldwide) of MOXIE’S DECISION and three (3) print copies of MOXIE’S
DECISION (U.S. entries only). The giveaway ends at 12 a.m. (EST) on
Monday, July 3.

To enter the giveaway, just click on the Rafflecopter widget below and follow the instructions. If the widget doesn’t appear, just CLICKHERE for a chance to win a copy of this fun book.

Thanks for stopping by today.
Do you enjoy stories with bits of fun blended in?