Today I'm honored to have C. Lee McKenzie.
Author of Sign of the Green Dragon
her third Middle Grade novel.
You can read my review HERE!

1.   How long does it take to research a topic before you write? And for this book? Did you learn something unusual during your research that you can share here?

ANSWER: Each book takes a different length of time. For Sign of the Green Dragon, I’d already done a lot of research into Chinese Dragon lore, and I had a fair background in the early history of the Gold Rush era. I happen to love that period in California history, so I read a lot about it.

I think the tenacity of the Chinese miners is the most unusual thing I stumbled on and used in this story. When white men abandoned a mine because it didn’t have the gold they wanted, the Chinese were “allowed” to take over. They mined what’s called the “tailings” and with long hours of  back-breaking work they pulled out a lot of gold. They suffered a lot of injustice from our system, and were so heavily taxed that many left mining and went to live in San Francisco.

2.   What resources do you use? In general and for this book? Do you use professionals to verify your facts, such as the police? Is there a good way to approach them? How valuable is their input? Or do you just wing it?

ANSWER: With Dragon, I used my background knowledge of the era and what I’d read about dragon mythology. For other stories, I’ve gone to the police to ask for verification of what I think is true. I’m just wrapping up a young adult story and I wanted to use a lucky charm to save a shooting victim’s life. I needed to be sure 1) a small charm could deflect a bullet sufficiently and 2) I could write that it was a 22 calibre bullet used in the shooting. Two police people have said yes, so I’m going with it.

My first book was about cutting, and I had never known a cutter, so I read a lot, but I was very lucky to sit next to a suicide counselor at a conference. We talked and she offered to read the scenes I wasn’t sure about. She was a great help and my scenes about the cutting and the counseling sessions are as accurate as I can hope to make them. BTY since that book, I’ve met cutters. They’ve read my book, and they say I got it right.

ANSWER: I’ve done both. I’ve had two publishers. One bought two of my young adult books, and I received $5,000 for my debut novel and $6,000 for the second one. (I’m telling you this because the story of my publishing journey is weird, yet probably not unique) Then I “sold” two more young adult stories to a different publisher, but this time out I didn’t see any up-front cash. They only pay me in royalties.

I self-published my three middle grade novels. Frankly, I never expected to make any money from these books. I wrote them because I needed a break from YA angst and I love to write adventure/fantasy for this age group.

I  have no idea if self-publishing is a route to take and build an audience. In fact, it probably isn’t. A lot of agents don’t like to take on self-published people unless they’ve sold mega books and created a stir. That’s hard to do, but when it happens it’s wonderful. One thing I know for sure, there is no formula for building an audience except: a darned good book and lots of promo. Even if the promo’s good, if the books isn’t, there’s not a ghost of a chance for an audience.

4.   Does writing provide you a sufficient income to live on? If so, how long did it take before this happened? Is it your goal to be financially successful, or do you write and publish solely for the 'satisfaction of sharing your stories’?
ANSWER: No. Pure and simple. I’d have to move to the middle of the Mojave and eat insects if I had to live on what I make writing. I’ve had one career and that has made me financially secure and very happy in many ways. I write stories because I love to do it, and I so appreciate that money isn’t a motivation.

5.   What's the funniest thing that happened to you on a book tour?

ANSWER: I had to evacuate a hotel in my coat with nothing else on. The fire alarm sounded just as I stepped out of the shower, so I threw on my coat and headed to the fire escape along with hundreds of others. I was in New York on the 20th floor of the Hilton. Do you have any idea how far twenty floors is when you can smell smoke and you’re wearing nothing but your coat?  Oh yes, and my hair was wet. It was February. I remember thinking how much I loved California because having wet hair there in February wouldn't have been such a big deal. It didn’t seem funny at the time, but time has revealed the humor to me.

6.   What's the next step for you? Television, movies, a new genre? Tell us what the future holds - what can your fans expect?

ANSWER: No new genre yet. I’m always open to TV and movie contracts, but they don’t seem headed my way. However, my next book should be on the way to my lovely agent soon. It’s a young adult and it’s one of the hardest books I’ve ever tackled. I’ll have to write three middle grade stories to recover from this one. 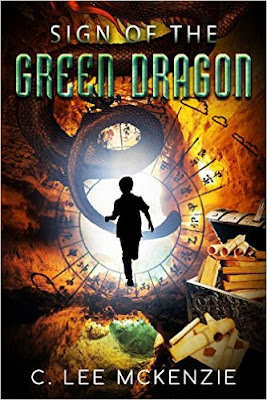 After six months in a new school, Sam’s finally fitting in. He’s the one kid with enough talent to hit the winning home run and bring the baseball trophy back to Haggarty Elementary. But Sam’s guardian is shipping him off to boarding school before that can happen.

When his teammates, Joey and Roger, hear his bad news, they plot to hide him until the big game. Their secret cave is a perfect place until an earthquake shatters a wall and reveals a wooden chest with a red-eyed dragon carved into its top. Inside, a crumbling skeleton clutches a map with a cryptic note, promising treasure if the finder reveals the truth about an old murder and returns the remains of the victim to China.

Is the note a hoax? Maybe. But what does Sam have to lose? With Joey and Roger, he sets off to track down the clues and hopefully discover treasure. When finally some puzzle pieces start to make sense, they become lost in a labyrinth of underground tunnels, trapped by dangerous thieves and sealed inside an airless tomb.

Sign of the Green Dragon gets a high five for fantasy, fun and some fearsome adventure. If you like intrepid would-be knights on impossible and dangerous quests, you’ll love this story. As one reader says, this book, “has more twists than a dragon’s tail.”

Buy now and jump into the adventure.

C. Lee McKenzie has a background in Linguistics and Inter-Cultural Communication. Her greatest passion is writing for young readers. Sign of the Green Dragon is her third Middle Grade novel. Alligators Overhead and the sequel, The Great Time Lock Disaster were her first two. She has traditionally published four young adult novels: Sliding on the Edge, The Princess of Las Pulgas, Double Negative and Sudden Secrets.
As a native Californian, and after living a lot of different places in the world, Lee landed back in her native state on the edge of a redwood forest. When not writing or blogging Lee is hiking or practicing yoga.

How about you readers?
Have you experienced your worst nightmare during a book tour?