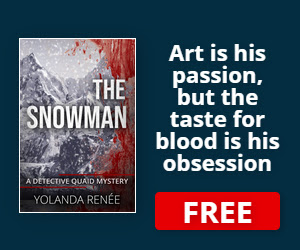 Crowds had gathered for the annual Halloween party at The Office Bar on Sixth Avenue. The Channel 6 News anchors and their admirers swigged cocktail after cocktail, except Denise Cochran, who still nursed her first drink. A business-like motif of steel, wood and modern furniture inspired sterility, not party fun, but tonight, the place pulsated with life. Denise sipped her Cosmo as her foot tapped to the latest pop music tunes from the live band Heart Stop.

She checked her watch. "Dammit, Steven, where are you?" she muttered.

"What happened? He finally figure out you were only dating him for that juicy murder story?" Kylie asked, slurring her words.

"Nice friend you are. Isn’t that your fifth drink? You’re drunk—start ordering coffee before you embarrass yourself. Steven will be here. You’ll see."

"How long you gonna string this one along? And I’m not drunk, just pleasantly buzzed." She craned her neck and winked. Denise’s gaze followed.

"Sorry I’m late," Steven said and gave Denise a peck on the cheek. "What’d I miss?"

"Nothing." Denise glared at Kylie and quickly led Steven away from her loose-mouthed friend. "What took you so long?"

"Work. It’s been maddening trying to figure out this guy. Was that the friend you’ve been telling me about? Why didn’t you introduce us?"

"Come dance with me. I’ll introduce you later."

She rested her head on his shoulder as the music changed to a slow number. "It’s not snowing yet." She locked eyes with him. "I want your full attention. Later, the Snowman can have it. Much later." She touched his cheek and moved in closer.

"Sorry. It’s going to hit the airwaves tonight. First, the report on the snowstorm, and then speculation on whether another girl will disappear," Denise said.

"Shit! The press is turning this into a three-ring circus. You're giving the bastard just what he wants. The Snowman, really!"

The other books in the series are:

And not they are all selling for

Own the entire series!

Light is a fleeting moment in the frozen north that is Alaska. Although the sun shines brightly during the Summer Solstice, Detective Steven Quaid struggles to hold on to what he holds dear during life's darkest moments, his love for family, and professional achievement. Will a murderous stalker, a self-proclaimed Lucifer resurrected, or insidious obsession prove more powerful than this dedicated detective? Six separate life-threatening situations. One determined man.