This is my entry for the WEP Gardens Flash Fiction Challenge. Please be warned the story took a dark turn. It wasn't meant to, but when I write I go where the prompt takes me. I've been working on my WIP The Snowman, and I'm afraid the antagonist took over this project.
This picture was my inspiration, especially when I envisioned it in a winter setting.

Gardens always mean something else,
man absolutely uses one thing to say another. 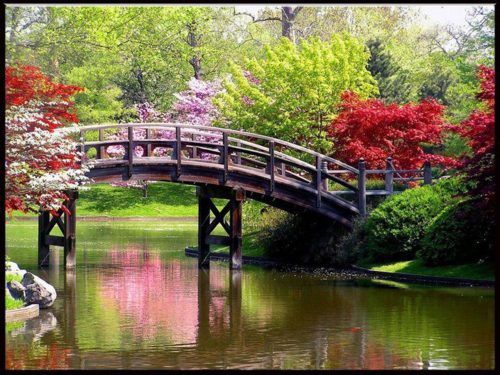 Janelle finally arrived home. The day had been exhausting, and the drive seemed to have taken hours, when in truth, it had barely been one. Fresh snow always slowed traffic to a crawl. She almost wished she'd rented a place in town, but when a childhood friend had offered his fabulous home at no cost, well, it was perfect. Too good to be true, but that was before the harassment started. Now she dreaded coming home.
John Hughes's elegant house was located on a ridge over Cheat Lake just minutes from the University of Morgantown. The police had suggested she update the security system, but she was house sitting and needed his permission first. John immediately agreed and gave her the number of a security firm. The police and the company she'd contracted had suggested cameras. Janelle vetoed the idea—at least inside the house. The last thing she wanted was to be a YouTube sensation.
Threats originally came in the form of letters addressed to the bitch in residence. At first, Janelle thought it was a joke. She was new in town, a professor at the university with John as the only other person she knew well. John suggested that maybe his former girlfriend was the target, but the letters became personal when they included pictures of her. Her stalker had taken them as she went about her day at the university and around town.
After contacting the police, Janelle learned that several women had received the same threatening letters. The police assured her the man was harmless. They suggested that he was just trying to create terror on a broad spectrum but would never follow through. She prayed they were right, but soon after her visit to police headquarters, the phone calls started. The messages were grotesque and sexual in nature, the voice mechanical.
Janelle almost packed her bags after Detective Malaren informed her she was the only one receiving the threatening calls. Fear gripped her fully, but she found her courage and made getting the security system updated, her principal goal. Detective Malaren also suggested a roommate or bodyguard. She agreed.
Tomorrow the installation would happen and tonight she would play host to her first personal bodyguard, all on her tab. Until this creep was behind bars, Janelle didn't want to be alone in a large home several miles from town.
Before unlocking the door and switching on the lights, she checked the road leading to the house and wondered where the bodyguard was. The security firm assured her he'd meet her at the house, would probably be waiting when she arrived. He wasn't. Janelle blamed the snowstorm.
All she wanted was a soft chair and a glass of wine, but instead, started a pot of coffee, and searched the refrigerator for staples to begin dinner, wondering if she should make enough for two. She noticed that the house was unusually cold, verified via the thermostat. Worried that the furnace was on the blink, she went to the den to build a fire. The air was more frigid than usual. French doors leading out to the deck were standing open. Snow had drifted inside. Had she forgotten to latch them? The wind on that side of the house sometimes popped them open if left unlocked. She wondered if the new security installation would fix the problem. 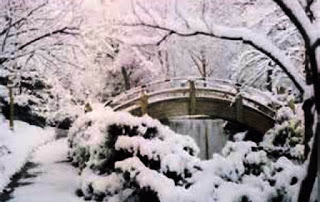 Turning on the exterior lights, she stepped onto the deck. During the darkness of winter, the owner, John, wanted to see his beautifully landscaped yard. Spotlights highlighted the bridge across the small creek, and a new layer of snow covered evergreens, Japanese maples, and massive boulders.

Statues of angels graced the area, each one featured in a heavenly glow. The recent snowfall made it a winter wonderland. Most mornings would find Janelle seemingly mesmerized by the beauty of the garden while she nursed a cup of coffee and contemplated life. The panorama brought her joy, and no matter the season, the changing beauty filled her with peace.
Tonight, at this moment, the cherished Vista froze her to the spot. The beautiful winter paradise was now her nightmare come tangible.
Someone had shattered the angels and splattered them with blood. Most of the spotlights now glowed red. On the frozen creek laid the torsos of three women. Their naked bodies staged grotesquely. Their heads hung from the ornate bridge, tied in place by their hair. A trail of blood flowed from each body. Beheaded on the icy creek and immediately strung up on the bridge. Their grisly end caught in deaths final scream.
Janelle recognized the other women tormented with the beast's haunting letters. The sight sent her reeling backward. The sound of her screams dragged her into a living nightmare where there was no escape.
Someone stood in her way. Janelle fainted. He caught her. Held her inert body and looked beyond her to the scene in the snow, a smile splayed across his face.
Written in blood above the bodies - a crude message -Welcome Home, Lover.

The police found Janelle's body on a pedestal in the garden. Sitting in the lotus position with an elaborate pair of feathered wings crudely sewn into her back and a pentagram cut into her chest. The only other wounds were the deep cuts on her wrists. She'd bled out in place. Paralyzed by drugs, Janelle had been unable to move while the horror played out. The other women had suffered the same fate. They'd been aware of the torture, the beheading, and their assailant.
The security firm insisted the owner, John Hughes, had canceled the bodyguard that Janelle had hired because he was on his way home. When they reached John, he was still in Europe and would be for the next six months.
***
Stone downloaded the pictures to his computer and masturbated as he relived each delicious moment of the night before. Several loud knocks on the ceiling startled him from his pleasuring.
"Stowie, breakfast!"
"Coming, Mommy."

Enjoy more entries from the WEP Gardens Challenge from the list below!