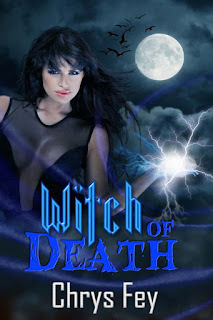 Blogging and writing friend Chrys Fey
is talking about the supernatural today.
Welcome, Chrys - now take it away!


QUESTION: What are your favorite supernatural beings?

Detective Reid Sanders doesn’t believe in the
supernatural, but when he’s faced with a crime scene that defies the laws of
nature, he has no other choice but to start believing. And solving a magical
murder involves working with a witch.

Liberty Sawyer embodies the look of your classic evil
witch, so, it’s no surprise when she uncovers the murderer is a witch that she
becomes Reid’s number one suspect. If she can’t convince him otherwise, more
people could lose their lives to dark magic, including her.

Liberty Sawyer glided swiftly through the horde of police
officers, reporters, and on- lookers. Black hair fell from a rigid part in the
middle of her scalp to her hips. Her eyes were a soul-stabbing blue and her
lips were blood-red. She towered over the other officers on the scene, and wore
all black, which set off 6 the pallor of her skin.

Showing her badge to the officer, she slipped under the
crime scene tape. A few paces away, she spotted Detective Corbin talking to his
new partner, a man she knew by name but hadn’t had the privilege of meeting
yet.

“I cannot believe you called her,” the new man was saying
when she came up behind them. “We don’t need a damn psychic!”

“Actually, I’m a witch.” She smiled when Reid jolted and
turned to face her. “I’m
Detective Liberty Sawyer.” She stuck out her hand.

“Detective Reid Sanders,” he grunted back and took her
hand.

The feel of his palm against hers sent tingles of lust
from the tips of her fingers to her shoulder blade, and she knew he felt it too
by the way he jerked his hand back. She winked at him playfully, hoping it
would unnerve him even more.

Jolie Montgomery, a twenty-one-year-old woman, wakes up
in an alley next to her corpse. She has no memories of her murder or the night
she died. She didn’t even see the killer’s face before he or she took her life.
Wanting justice, Jolie seeks answers in the only way a ghost can...by stalking
the lead detective on the case.

Avrianna Heavenborn is determined to find the person
responsible for a young woman’s death. She gets closer to the killer’s identity
with every clue she uncovers, and Jolie is with her every step of the way.

But if they don’t solve her murder soon, Jolie will be an
earth-bound spirit forever.

When Fey was six years old, she realized her dream of
being a writer by watching her mother pursue publication. At the age of twelve,
she started writing her first novel, which flourished into a series she later
rewrote at seventeen. Fey lives in Florida where she is waiting for the next
hurricane to come her way.


You can connect with her on Facebook and her blog, Write with Fey. She loves to get to know her readers!